Lakesman 2018 in the bag. What a journey to the day and what a challenge completing it. More than happy with the result, and considering I’d never run more than a half marathon (once) I was pleased to just get around the run course in one piece!

The swim began at 6am. Mass deep water start (not really deep, you could stand in it). The horn went off before I even realised it was coming and we were off! 25 buoys to go around a rectangular course. The first leg out seemed to take forever, but I got in the groove fairly quickly and thankfully it never seemed too crowded in the water. I managed to front crawl the entire course and never felt the sense of panic that so often appears on long OW swims. Eventually got round and out of the water for a slightly wobbly run the couple of hundred metres up to the transition tent.

With the weather looking a bit grim I opted for a cycling jersey and arm warmers (both Kendal Tri club, of course) over the tri suit. Thankfully a volunteer was handy to help pull the arm warmers over my wet arms and pack away by swim gear into the blue ‘bike’ bag. Out to the bike and off onto the course.

With a fairly quick spin down the A66 out of Keswick to the west, the bike started well. Then course turned south into a headwind and got a bit lumpy with hills, and the workload started to increase. Once the course turned northward up the coast things sped up dramatically. From Whitehaven almost up to Silloth, the strong southerly wind kept the speed up but the pedalling became relentless as I wanted to make the most of this fast section. Turning south at Blitterlees it became painfully obvious how much assistance the wind had been giving us, as everything slowed and became a grind, with hills and wind slowing everything right down. Even guys on tri bikes with aero helmets were struggling here. A 32km loop back to the coast and I got to enjoy the tailwind again for a brief while before being battered by the winds on the second turn south. From here on it it would prove to be a test of will and determination, with strong headwinds all the way back to Keswick.

Thankfully back at transition, time to lose the cycling jersey and put on the running shoes.

Out onto the run course. With my history of running injuries and lack of run training this was always going to be the toughest part of the course. 5 laps of 8+ km with several out and backs and repeated sections of road, collecting a wristband every time round. At the start I felt a light-hearted agression to those with 4 or 5 bands when I was only on my first lap. By the end I was really feeling for those who still only had 2 bands when I had 5 and was feeling like I had nothing left. The marathon was pretty brutal, but the support from the crowds and the fantastic volunteers at the aid stations made it much more bearable. The Results Base van on one section of the course was blasting out classic 80’s metal, which was great for motivatingme to stop walking and get back running. I met up with my best friend on lap 2; I had been ahead of him by about 30 minutes over the course so far but he had caught me on the run. We agreed without communicating it to finish the race together, motivating each other to keep moving. Seeing my wife and kids once a lap added to my motivation to get round. Massive kudos as well to Peter Bascombe and other friends who were out to support us and keep myself and Dan Malcolm in good spirits. There was always a smile on my face despite the pain in my legs. Finally I reached the end of the run course. I ran down the finishing chute with my 5-yr old daughter holding my hand and running with me. I felt very proud and amazed for having completed this and to see the pride in my daughter’s eyes at her dad, especially on Father’s Day.

The Lakesman is a bit of a special race. I can’t comment on Ironman branded races having never done one, but the Lakesman is really well organised, with fantastic volunteers and race officials. The BTF official was out on the run course, shaking hands and congratulating people, it all felt like a big family. I would highly recommend it. Will I do it again? I swore yesterday on the run that I never would, but the agony of the day is already fading and being replaced by a massive sense of achievement and pride, not just at completing my first full-distance event, but pride at being part of something so special. So who knows, watch this space…. 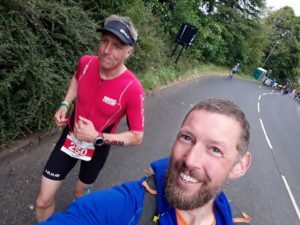